In this lecture we study a simplified version of an uncertainty traps model of Fajgelbaum, Schaal and Taschereau-Dumouchel [FSTD15].

The model features self-reinforcing uncertainty that has big impacts on economic activity.

The original model described in [FSTD15] has many interesting moving parts.

Here we examine a simplified version that nonetheless captures many of the key ideas.

The evolution of the fundamental process \(\{\theta_t\}\) is given by

The random variable \(\theta_t\) is not observable at any time.

There is a total \(\bar M\) of risk averse entrepreneurs.

Output of the \(m\)-th entrepreneur, conditional on being active in the market at time \(t\), is equal to

Here the time subscript has been dropped to simplify notation.

The inverse of the shock variance, \(\gamma_x\), is called the shock’s precision.

The higher is the precision, the more informative \(x_m\) is about the fundamental.

Output shocks are independent across time and firms.

All entrepreneurs start with identical beliefs about \(\theta_0\).

Signals are publicly observable and hence all agents have identical beliefs always.

Here \(\gamma\) is the precision of beliefs; its inverse is the degree of uncertainty.

These parameters are updated by Kalman filtering.

With this notation and primes for next period values, we can write the updating of the mean and precision via

These are standard Kalman filtering results applied to the current setting. 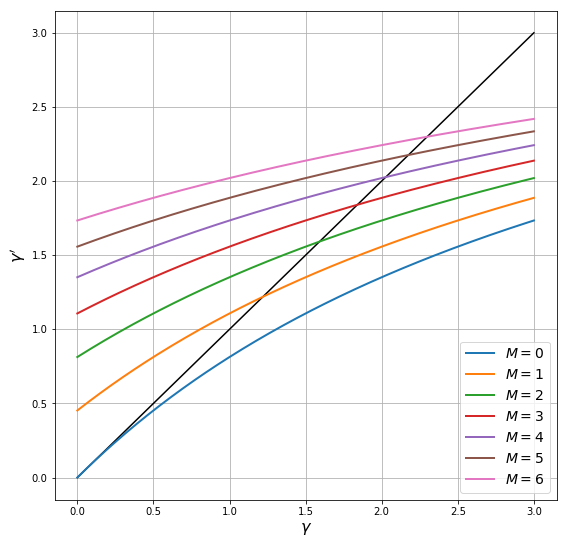 Points where the curves hit the 45 degree lines are long run steady states for precision for different values of \(M\).

Thus, if one of these values for \(M\) remains fixed, a corresponding steady state is the equilibrium level of precision

In practice, as we’ll see, the number of active firms fluctuates stochastically.

Omitting time subscripts once more, entrepreneurs enter the market in the current period if

The statement that \(F_m\) is previsible means that it is realized at the start of the period and treated as a constant in (53.4).

The utility function has the constant absolute risk aversion form

where \(a\) is a positive parameter.

Using standard formulas for expectations of lognormal random variables, this is equivalent to the condition

We want to simulate this economy.

We’ll want a named tuple generator of the kind that we’ve seen before.

And we need methods to update \(\theta\), \(\mu\) and \(\gamma\), as well as to determine the number of active firms and their outputs.

In the results below we use this code to simulate time series for the major variables. 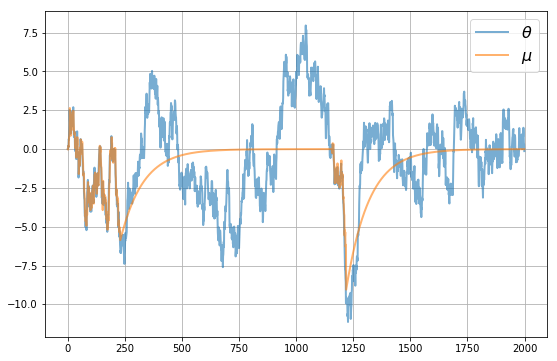 We see that \(\mu\) tracks \(\theta\) well when there are sufficient firms in the market.

However, there are times when \(\mu\) tracks \(\theta\) poorly due to insufficient information.

These are episodes where the uncertainty traps take hold.

To get a clearer idea of the dynamics, let’s look at all the main time series at once, for a given set of shocks 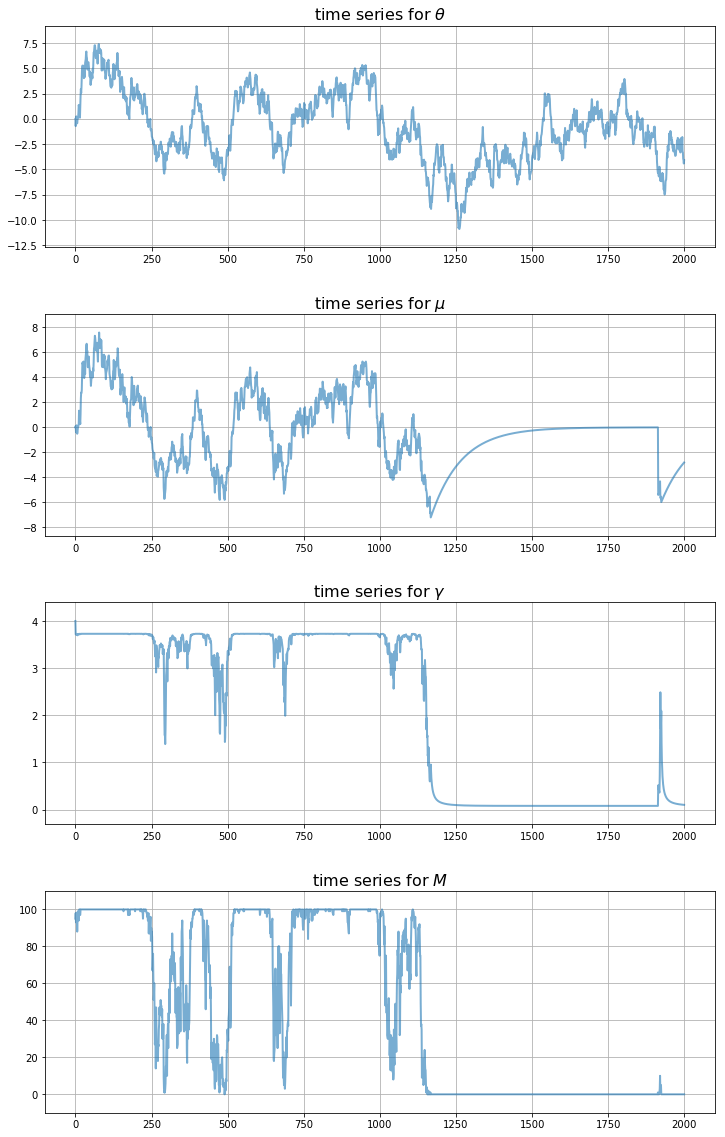 Notice how the traps only take hold after a sequence of bad draws for the fundamental.

Thus, the model gives us a propagation mechanism that maps bad random draws into long downturns in economic activity.

This exercise asked you to validate the laws of motion for \(\gamma\) and \(\mu\) given in the lecture, based on the stated result about Bayesian updating in a scalar Gaussian setting.

The stated result tells us that after observing average output \(X\) of the \(M\) firms, our posterior beliefs will be

If we take a random variable \(\theta\) with this distribution and then evaluate the distribution of \(\rho \theta + \sigma_\theta w\) where \(w\) is independent and standard normal, we get the expressions for \(\mu'\) and \(\gamma'\) given in the lecture.

First let’s replicate the plot that illustrates the law of motion for precision, which is

Next let’s generate time series for beliefs and the aggregates – that is, the number of active firms and average output