Next we study a computational problem concerning career and job choices.

The model is originally due to Derek Neal [Nea99].

This exposition draws on the presentation in [LS18], section 6.5.

In what follows we distinguish between a career and a job, where

For workers, wages can be decomposed into the contribution of job and career

At the start of time \(t\), a worker has the following options

Draws of \(\theta\) and \(\epsilon\) are independent of each other and past values, with

A young worker aims to maximize the expected sum of discounted wages.

subject to the choice restrictions specified above.

As in [LS18], section 6.5, we will focus on a discrete version of the model, parameterized as follows:

A very useful family of discrete distributions is the Beta-binomial family, with probability mass function

Here’s a figure showing the effect of different shape parameters when \(n=50\).

The code for solving the DP problem described above is found below:

In fact all our default settings correspond to the version studied in [LS18], section 6.5.

Hence we can reproduce figures 6.5.1 and 6.5.2 shown there, which exhibit the value function and optimal policy respectively.

The optimal policy can be represented as follows (see Exercise 3 for code). 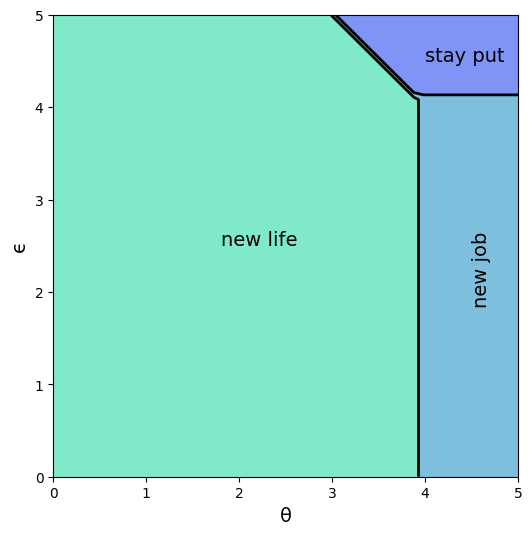 Notice that the worker will always hold on to a sufficiently good career, but not necessarily hold on to even the best paying job.

The reason is that high lifetime wages require both variables to be large, and the worker cannot change careers without changing jobs.

Using the default parameterization in the CareerWorkerProblem, generate and plot typical sample paths for \(\theta\) and \(\epsilon\) when the worker follows the optimal policy. 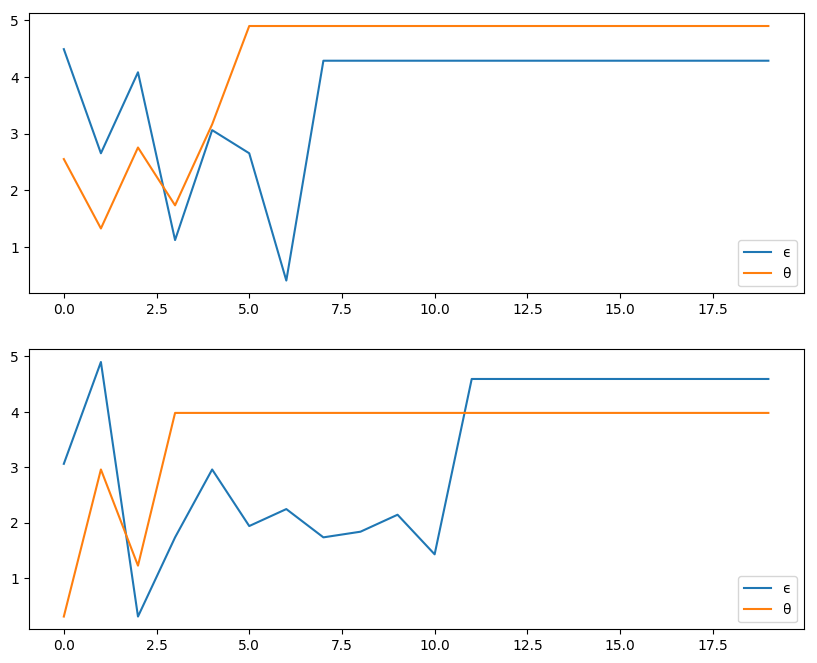 Hint: To generate the draws from the distributions \(F\) and \(G\), use the type DiscreteRV.

In other words, we want to study the distribution of the random variable

Letting \(S\) denote this region, \(T^*\) can be expressed as the first passage time to \(S\) under the optimal policy:

Collect 25,000 draws of this random variable and compute the median (which should be about 7).

Repeat the exercise with \(\beta=0.99\) and interpret the change.

As best you can, reproduce the figure showing the optimal policy.

Hint: The get_greedy() method returns a representation of the optimal policy where values 1, 2 and 3 correspond to “stay put”, “new job” and “new life” respectively. Use this and the plots functions (e.g., contour, contour!) to produce the different shadings.

Now set G_a = G_b = 100 and generate a new figure with these parameters. Interpret.

The median for the original parameterization can be computed as follows

The medians are subject to randomness, but should be about 7 and 14 respectively. Not surprisingly, more patient workers will wait longer to settle down to their final job.

Here’s the code to reproduce the original figure

Now, we need only swap out for the new parameters

You will see that the region for which the worker will stay put has grown because the distribution for \(\epsilon\) has become more concentrated around the mean, making high-paying jobs less realistic.