In this lecture we’re going to study a simple optimal growth model with one agent.

The technique we use to solve the model is dynamic programming.

Our treatment of dynamic programming follows on from earlier treatments in our lectures on shortest paths and job search.

We’ll discuss some of the technical details of dynamic programming as we go along.

This output can either be consumed or invested.

When the good is invested it is transformed one-for-one into capital.

The resulting capital stock, denoted here by \(k_{t+1}\), will then be used for production.

Production is stochastic, in that it also depends on a shock \(\xi_{t+1}\) realized at the end of the current period.

Next period output is

The resource constraint is

and all variables are required to be nonnegative.

While many other treatments of the stochastic growth model use \(k_t\) as the state variable, we will use \(y_t\).

This will allow us to treat a stochastic model while maintaining only one state variable.

We consider alternative states and timing specifications in some of our other lectures.

Taking \(y_0\) as given, the agent wishes to maximize

In (34.3) we are assuming that the resource constraint (34.1) holds with equality — which is reasonable because \(u\) is strictly increasing and no output will be wasted at the optimum.

In the present context

One way to think about solving this problem is to look for the best policy function.

A policy function is a map from past and present observables into current action.

We’ll be particularly interested in Markov policies, which are maps from the current state \(y_t\) into a current action \(c_t\).

For dynamic programming problems such as this one (in fact for any Markov decision process), the optimal policy is always a Markov policy.

In other words, the current state \(y_t\) provides a sufficient statistic for the history in terms of making an optimal decision today.

This is quite intuitive but if you wish you can find proofs in texts such as [SLP89] (section 4.1).

Hereafter we focus on finding the best Markov policy.

In our context, a Markov policy is a function \(\sigma \colon \mathbb R_+ \to \mathbb R_+\), with the understanding that states are mapped to actions via

In what follows, we will call \(\sigma\) a feasible consumption policy if it satisfies

The set of all feasible consumption policies will be denoted by \(\Sigma\).

This is the time path for output when we choose and stick with the policy \(\sigma\).

We insert this process into the objective function to get

This is the total expected present value of following policy \(\sigma\) forever, given initial income \(y_0\).

The aim is to select a policy that makes this number as large as possible.

The next section covers these ideas more formally.

In other words, it is the lifetime value of following policy \(\sigma\) starting at initial condition \(y\).

The value function is then defined as

The value function gives the maximal value that can be obtained from state \(y\), after considering all feasible policies.

With our assumptions on utility and production function, the value function as defined in (34.8) also satisfies a Bellman equation.

For this problem, the Bellman equation takes the form

This is a functional equation in \(w\).

The Bellman equation is important because it gives us more information about the value function.

It also suggests a way of computing the value function, which we discuss below.

The primary importance of the value function is that we can use it to compute optimal policies.

The details are as follows.

In other words, \(\sigma \in \Sigma\) is \(w\)-greedy if it optimally trades off current and future rewards when \(w\) is taken to be the value function.

In our setting, we have the following key result

The intuition is similar to the intuition for the Bellman equation, which was provided after (34.9).

Hence, once we have a good approximation to \(v^*\), we can compute the (approximately) optimal policy by computing the corresponding greedy policy.

The advantage is that we are now solving a much lower dimensional optimization problem.

How, then, should we compute the value function?

One way is to use the so-called Bellman operator.

(An operator is a map that sends functions into functions)

The Bellman operator is denoted by \(T\) and defined by

By construction, the set of solutions to the Bellman equation (34.9) exactly coincides with the set of fixed points of \(T\).

which says precisely that \(w\) is a solution to the Bellman equation.

Hence it has exactly one fixed point in this set, which we know is equal to the value function.

We also know that a feasible policy is optimal if and only if it is \(v^*\)-greedy.

Our problem now is how to compute it.

The results stated above assume that the utility function is bounded.

In practice economists often work with unbounded utility functions — and so will we.

Unfortunately, they tend to be case specific, as opposed to valid for a large range of applications.

Nevertheless, their main conclusions are usually in line with those stated for the bounded case just above (as long as we drop the word “bounded”).

Let’s now look at computing the value function and the optimal policy.

In theory, the algorithm is as follows

However, there is a problem we must confront before we implement this procedure: The iterates can neither be calculated exactly nor stored on a computer.

Clearly this is impossible.

What we will do instead is use fitted value function iteration.

The procedure is to record the value of the function \(Tw\) at only finitely many “grid” points \(y_1 < y_2 < \cdots < y_I\) and reconstruct it from this information when required.

More precisely, the algorithm will be

How should we go about step 2?

This is a problem of function approximation, and there are many ways to approach it.

What’s important here is that the function approximation scheme must not only produce a good approximation to \(Tw\), but also combine well with the broader iteration algorithm described above.

One good choice from both respects is continuous piecewise linear interpolation (see this paper for further discussion).

Another advantage of piecewise linear interpolation is that it preserves useful shape properties such as monotonicity and concavity / convexity.

Notice that the expectation in (34.11) is computed via Monte Carlo, using the approximation

Monte Carlo is not always the most efficient way to compute integrals numerically but it does have some theoretical advantages in the present setting.

(For example, it preserves the contraction mapping property of the Bellman operator — see, e.g., [PalS13])

Let’s test out our operator when

As is well-known (see [LS18], section 3.1.2), for this particular problem an exact analytical solution is available, with

In addition to the model parameters, we need a grid and some shock draws for Monte Carlo integration.

To test our code, we want to see if we can replicate the analytical solution numerically, using fitted value function iteration.

Now let’s do some tests.

As one preliminary test, let’s see what happens when we apply our Bellman operator to the exact solution \(v^*\).

In theory, the resulting function should again be \(v^*\).

In practice we expect some small numerical error.

The two functions are essentially indistinguishable, so we are off to a good start.

Now let’s have a look at iterating with the Bellman operator, starting off from an arbitrary initial condition.

The sequence of iterates converges towards \(v^*\).

We are clearly getting closer.

We can write a function that computes the exact fixed point

The figure shows that we are pretty much on the money

To compute an approximate optimal policy, we take the approximate value function we just calculated and then compute the corresponding greedy policy.

The figure shows that we’ve done a good job in this instance of approximating the true policy.

Once an optimal consumption policy \(\sigma\) is given, income follows (34.5). 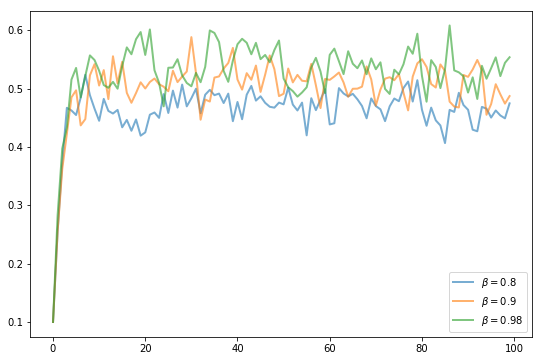 We have also dialed down the shocks a bit.

Otherwise, the parameters and primitives are the same as the log linear model discussed earlier in the lecture.