A Lake Model of Employment and Unemployment¶

This lecture describes what has come to be called a lake model.

The lake model is a basic tool for modeling unemployment.

It allows us to analyze

It is a good model for interpreting monthly labor department reports on gross and net jobs created and jobs destroyed.

The “lakes” in the model are the pools of employed and unemployed.

The “flows” between the lakes are caused by

For the first part of this lecture, the parameters governing transitions into and out of unemployment and employment are exogenous.

We’ll also use some nifty concepts like ergodicity, which provides a fundamental link between cross-sectional and long run time series distributions.

These concepts will help us build an equilibrium model of ex ante homogeneous workers whose different luck generates variations in their ex post experiences.

Before working through what follows, we recommend you read the lecture on finite Markov chains.

You will also need some basic linear algebra and probability.

The economy is inhabited by a very large number of ex ante identical workers.

The workers live forever, spending their lives moving between unemployment and employment.

Their rates of transition between employment and unemployment are governed by the following parameters:

The growth rate of the labor force evidently equals $ g=b-d $.

We want to derive the dynamics of the following aggregates

We also want to know the values of the following objects

Laws of Motion for Stock Variables¶

We begin by constructing laws of motion for the aggregate variables $ E_t,U_t, N_t $.

Of the mass of workers $ U_t $ workers who are currently unemployed,

Therefore, the number of workers who will be employed at date $ t+1 $ will be

The value $ b(E_t+U_t) $ is the mass of new workers entering the labor force unemployed.

This law tells us how total employment and unemployment evolve over time.

Laws of Motion for Rates¶

Now let’s derive the law of motion for rates.

we can also write this as

This follows from the fact that the columns of $ \hat A $ sum to 1.

Let’s code up these equations.

Let’s observe these matrices for the baseline model

And a revised model

On the other hand, the vector of employment and unemployment rates $ x_t $ can be in a steady state $ \bar x $ if there exists an $ \bar x $ such that

This equation tells us that a steady state level $ \bar x $ is an eigenvector of $ \hat A $ associated with a unit eigenvalue.

This is the case for our default parameters:

Dynamics of an Individual Worker¶

An individual worker’s employment dynamics are governed by a finite state Markov process.

The worker can be in one of two states:

The associated transition matrix is then

Let $ \psi_t $ denote the marginal distribution over employment / unemployment states for the worker at time $ t $.

As usual, we regard it as a row vector.

Not surprisingly, probability mass on the unemployment state increases with the dismissal rate and falls with the job finding rate rate.

Let’s look at a typical lifetime of employment-unemployment spells.

We want to compute the average amounts of time an infinitely lived worker would spend employed and unemployed.

These are the fraction of time a worker spends unemployed and employed, respectively, up until period $ T $.

How long does it take for time series sample averages to converge to cross sectional averages?

We can use QuantEcon.jl’s MarkovChain type to investigate this.

Let’s plot the path of the sample averages over 5,000 periods

The stationary probabilities are given by the dashed red line.

In this case it takes much of the sample for these two objects to converge.

This is largely due to the high persistence in the Markov chain.

The transition rate from unemployment to employment will be determined by the McCall search model [McC70].

All details relevant to the following discussion can be found in our treatment of that model.

The most important thing to remember about the model is that optimal decisions are characterized by a reservation wage $ \bar w $.

As we saw in our discussion of the model, the reservation wage depends on the wage offer distribution and the parameters

Linking the McCall Search Model to the Lake Model¶

Suppose that all workers inside a lake model behave according to the McCall search model.

But their optimal decision rules determine the probability $ \lambda $ of leaving unemployment.

We can use the McCall search version of the Lake Model to find an optimal level of unemployment insurance.

We assume that the government sets unemployment compensation $ c $.

The lump sum tax applies to everyone, including unemployed workers.

The post-tax income of an unemployed worker is $ c - \tau $.

For each specification $ (c, \tau) $ of government policy, we can solve for the worker’s optimal reservation wage.

This determines $ \lambda $ via (1) evaluated at post tax wages, which in turn determines a steady state unemployment rate $ u(c, \tau) $.

For a given level of unemployment benefit $ c $, we can solve for a tax that balances the budget in the steady state

We use a steady state welfare criterion

where the notation $ V $ and $ U $ is as defined in the McCall search model lecture.

The wage offer distribution will be a discretized version of the lognormal distribution $ LN(\log(20),1) $, as shown in the next figure 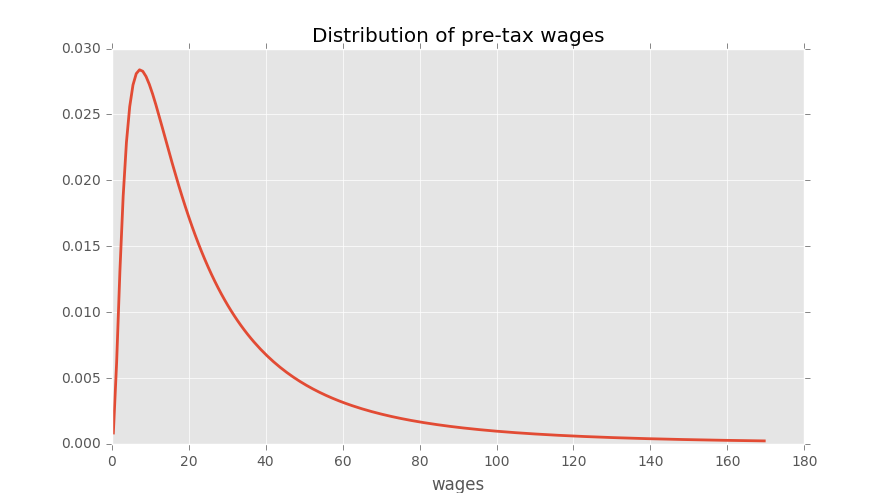 We take a period to be a month.

We set $ b $ and $ d $ to match monthly birth and death rates, respectively, in the U.S. population

Following [DFH06], we set $ \alpha $, the hazard rate of leaving employment, to

We will make use of (with some tweaks) the code we wrote in the McCall model lecture, embedded below for convenience.

And the McCall object

Welfare first increases and then decreases as unemployment benefits rise.

The level that maximizes steady state welfare is approximately 62.

Suppose that in response to new legislation the hiring rate reduces to $ \lambda = 0.2 $.

Plot the transition dynamics of the unemployment and employment stocks for 50 periods.

Plot the transition dynamics for the rates.

How long does the economy take to converge to its new steady state?

What is the new steady state level of employment?

Consider an economy with initial stock of workers $ N_0 = 100 $ at the steady state level of employment in the baseline parameterization.

Suppose that for 20 periods the birth rate was temporarily high ($ b = 0.0025 $) and then returned to its original level.

Plot the transition dynamics of the unemployment and employment stocks for 50 periods.

Plot the transition dynamics for the rates.

How long does the economy take to return to its original steady state?

And how the rates evolve

We see that it takes 20 periods for the economy to converge to it’s new steady state levels.

This next exercise has the economy experiencing a boom in entrances to the labor market and then later returning to the original levels.

For 20 periods the economy has a new entry rate into the labor market.

Here are the other parameters:

Now we reset $ b $ to the original value and then, using the state after 20 periods for the new initial conditions, we simulate for the additional 30 periods

Finally we combine these two paths and plot

The "Launch" button will launch a live version of the current lecture on the cloud and will allow you to change, run, and interact with the code.

You can choose to launch this cloud service through one of the public options that we have provided or through a private JupyterHub server. Once you have made your selection, the website will remember which server you previously used and automatically direct you to that cloud service unless you update your selection in this window