Previously we looked at the McCall job search model [McC70] as a way of understanding unemployment and worker decisions.

One unrealistic feature of the model is that every job is permanent.

In this lecture we extend the McCall model by introducing job separation.

Once separation enters the picture, the agent comes to view

The model concerns the life of an infinitely lived worker and

The worker can be in one of two states: employed or unemployed.

He wants to maximize

The only difference from the baseline model is that we’ve added some flexibility over preferences by introducing a utility function \(u\).

Here’s what happens at the start of a given period in our model with search and separation.

If currently unemployed, he

He can either accept or reject the offer.

If he accepts the offer, he enters next period employed with wage \(w'\).

If he rejects the offer, he enters next period unemployed.

When employed, the agent faces a constant probability \(\alpha\) of becoming unemployed at the end of the period.

(Note: we do not allow for job search while employed—this topic is taken up in a later lecture)

Here value means the value of the objective function (29.1) when the worker makes optimal decisions at all future points in time.

Suppose for now that the worker can calculate the function \(V\) and the constant \(U\) and use them in his decision making.

Let’s interpret these two equations in light of the fact that today’s tomorrow is tomorrow’s today.

Equation (29.3) incorporates the fact that a currently unemployed worker will maximize his own welfare.

Before discussing this, however, let’s make a small extension to the model.

Instead, let’s suppose that unemployed workers only receive an offer with probability \(\gamma\).

If our worker does receive an offer, the wage offer is drawn from \(p\) as before.

He either accepts or rejects the offer.

Otherwise the model is the same.

With some thought, you will be able to convince yourself that \(V\) and \(U\) should now satisfy

We’ll use the same iterative approach to solving the Bellman equations that we adopted in the first job search lecture.

Here this amounts to

In other words, we are iterating using the rules

Formally, we can define a “Bellman operator” T which maps:

In which case we are searching for a fixed point

A proof can be obtained via the Banach contraction mapping theorem.

The approach is to iterate until successive iterates are closer together than some small tolerance level.

We then return the current iterate as an approximate solution.

Let’s plot the approximate solutions \(U\) and \(V\) to see what they look like.

We’ll use the default parameterizations found in the code above.

At this point, it’s natural to ask how the model would respond if we perturbed the parameters.

These calculations, called comparative statics, are performed in the next section.

Once \(V\) and \(U\) are known, the agent can use them to make decisions in the face of a given wage offer.

If \(V(w) < U\), then remaining unemployed will generate greater lifetime value.

Suppose in particular that \(V\) crosses \(U\) (as it does in the preceding figure).

We denote this wage \(\bar w\) and call it the reservation wage.

Optimal behavior for the worker is characterized by \(\bar w\)

Let’s use it to look at how the reservation wage varies with parameters.

In each instance below we’ll show you a figure and then ask you to reproduce it in the exercises.

29.5.1. The Reservation Wage and Unemployment Compensation¶

In the figure below, we use the default parameters in the McCallModel tuple, apart from c (which takes the values given on the horizontal axis) 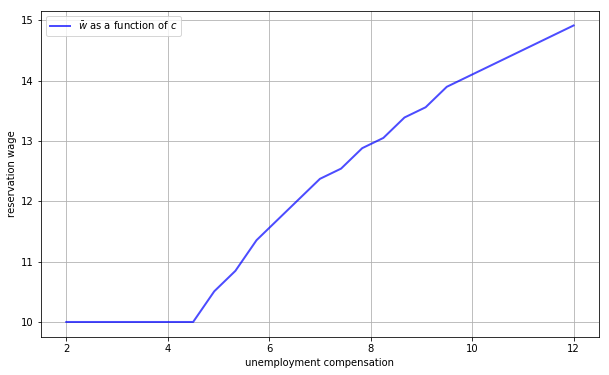 As expected, higher unemployment compensation causes the worker to hold out for higher wages.

In effect, the cost of continuing job search is reduced.

29.5.2. The Reservation Wage and Discounting¶

Next let’s investigate how \(\bar w\) varies with the discount rate. 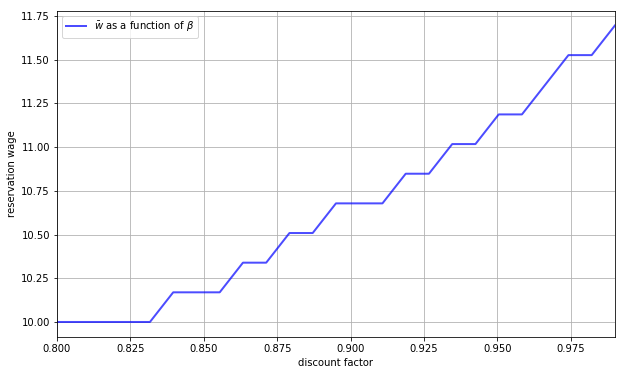 Again, the results are intuitive: More patient workers will hold out for higher wages.

29.5.3. The Reservation Wage and Job Destruction¶

Higher \(\alpha\) translates to a greater chance that a worker will face termination in each period once employed. 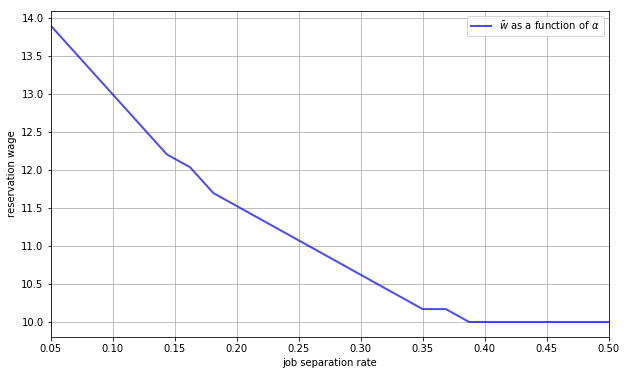 Once more, the results are in line with our intuition.

If the separation rate is high, then the benefit of holding out for a higher wage falls.

Hence the reservation wage is lower.

Reproduce all the reservation wage figures shown above.

Plot the reservation wage against the job offer rate \(\gamma\).

Using the solve_mccall_model function mentioned earlier in the lecture, we can create an array for reservation wages for different values of \(c\), \(\beta\) and \(\alpha\) and plot the results like so

Note that we could’ve done the above in one pass (which would be important if, for example, the parameter space was quite large).

As expected, the reservation wage increases in \(\gamma\).

This is because higher \(\gamma\) translates to a more favorable job search environment.